Even though we are now in the era of optogenetics, electrical stimulation of excitable tissues is still common place in the lab. However, despite how common they are, I see that a lot of people don’t fully understand why they using some fancy expensive box to deliver the stimulus, rather than just, say, using the DAC output of your digitizer. The actual physics of why passing current through your tissue excites neurons/muscles is a bit more complex than you might think, but that’s not what I’m going to talk about. I’m going to talk about what a stimulus isolator is, and why we use them.

Stimulus Isolators can be split up it two ways: the first way is battery powered versus mains powered, and the second way is constant current versus constant voltage. For the discussion today, it makes no difference. In both constant voltage and constant current stimulators, a voltage drives current between the two output terminals of the stimulator. And mains powered stimulus isolators try their very best to approximate battery powered stimulus isolators by running the AC voltages from the mains through some kind of transformer, which effectively “isolates” the stimulus isolator from earth. What do I mean what I say “isolates”? I mean that if a power source is isolated from earth, then the output of that power source cannot be measured relative to earth, as no current wants to flow from the power output to earth. Still confused? Let’s look at Fig. 1. 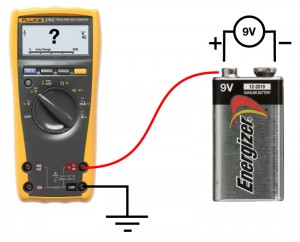 Fig 1. What voltage does the multimeter record?

Here we have a 9 volt battery, which truly has 9 volts between it’s positive and negative terminals. We get a multimeter and put it’s red lead on the positive terminal, and connect the black lead to earth. What voltage do we see on the multimeter? We see zero volts. We can explain this in lots of ways, but the simplest is to remember that current must flow in a circuit, in order for the multimeter to sense the voltage on the battery, electrons must flow from the battery to the earth, which if it did, it would not be able to get back to the negative terminal of the battery. Another way of thinking about this is that the multimeter is asking a question something like “What is the a height difference between the peak of Mount Everest (on Earth) and the peak of Mount Olympus (on Mars)?”. Yes, you could measure the height of each mountain from sea level (equivalent to measuring the voltage difference between ground and ground (0V) and the voltage difference between then positive and negative terminals of the battery (9V)) and then compare that measurement, but that isn’t what the question was. Directly asking what the the height difference between the peaks doesn’t even really make sense as a question because they share no common reference point. Similarly, asking what voltage exists between a battery terminal and the earth makes no sense unless the battery connected to earth, like it is in Fig 2. Now current can happily flow from the positive terminal of the battery, into the multimeter, into ground and then back into the battery. Or to put it another way, now the battery and the multimeter have a common reference point: the ground. 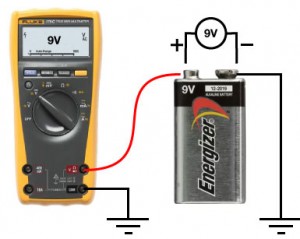 By connecting the negative terminal to ground, now we can measure the voltage over the battery.

So what does this have to do with stimulus isolators? Well if we replace the battery with a stimulus isolator, and the multimeter with our electrode connected to a preamplifier, we have a typical electrophysiology set up. If our stimulator is not isolated from ground, then the voltage it creates will be directly sensed by our preamplifier. How does this work? Well have a look at Fig 3.

Fig 3. shows us a non-isolated stimulator. I’ve drawn it’s power supply as a battery, but it could as well be a voltage output from a DAC or any other non-isolated voltage. Our recording electrode is sampling the voltage at VRecord, which is the same place as the two electrodes of our bipolar stimulating electrode (yes, there will be some resistance between all of these, but they don’t really matter in order to get a conceptual understanding).

When we stimulate, IStim becomes non-zero and flows to VRecord, where it hopefully activates excitable tissue. At that point the current has two choices, it can flow back through the other electrode of our bipolar stimulator ( IReturn ) or it can flow to ground ( IGround ). The exact way that the current splits is dependent on the exact ratio of RGround and the resistance of the stimulating electrode, but one way or another, some current will flow through RGround. This current then creates a voltage drop over RGround, which is added to whatever physiological signal we were recording at VRecord, i.e. we get a stimulus artifact.

Now you may be saying “Hang on there, I’ve used a stimulus isolator before, and I still see a stimulus artifact”, and of course, you do. This is because while a good stimulus isolator is essentially completely isolated from ground, resistively speaking, it still has some capacitive coupling to ground, usually on the order of 1-10’s of pF. So this is like putting a capacitor between the battery and ground in Fig 3. What this means is that rapidly changing voltages caused by your stimulator still allow some current to flow through RGround, creating a small stimulus artifact, but the smaller this capacitive coupling is, this smaller and briefer the artifact will be.

There is another benefit of using stimulus isolators: safety. Specifically, if you were to hold onto the positive output of a non-isolated 100V stimulator, it wouldn’t be fun, as current could flow through you, into ground, and from ground, back to the stimulator. However, if this stimulator was isolated this couldn’t happen, as there is no return path from ground to the stimulator. It’s basically the inverse of why birds can sit on overhead cables carrying mains electricity: the bird is isolated from ground, while the power isn’t, in our case however, it is the power which is isolated from ground, while you aren’t. In practice, if your are an in vitro scientist, this is a pretty theoretically benefit, but if you are using stimulators in a clinical setting to excite nerves or muscles, this is very important, as the last thing you want is current to flow through your patients heart to ground: you only want the current to flow between the two poles of your stimulating electrodes and into the muscle/nerve of choice.

5 thoughts on “Electrical Stimulation: Why we use isolators.”