Some of you may have seen this graph. It was tweeted out, non-ironically by an economist from a prestigious US university, and at first glace it seems ridiculous:

I’d like to talk about this graph, data, regression, causation and data analysis.

I’ve talked before about the problems series resistance [i.e. the resistance formed by the tip of your electrode and the gunk in it] poses when you’re performing whole-cell voltage clamp recordings. Simply put, it limits your ability to hold the cell at the voltages you want to, because every time you pass current, some voltage forms over the series resistance and you’re amplifier can’t tell the difference between the voltage over the membrane and the voltage over your series resistor. It also limits your temporal accuracy, as it helps to set up up a low pass filter for your command potential. Thankfully, because the problem is essentially inescapable during whole-cell voltage clamp, essentially all voltage clamp amplifiers come with series resistance compensation: an electronic procedure where the amplifier estimates how much of a problem your series resistance will be, and works to minimize it. However, in order for that circuitry to work, your amplifier needs to know the whole-cell capacitance of the cell you’re recording from (Cm) and how much series resistance (Rs) you’re up against. Typically your set these values while looking at the current response to a test pulse. However, outside of a few select examples, this process of telling the amplifier what Cm and Rs is (know as “correcting for whole-cell parameters” or “capacitance compensation”) isn’t actually trivial. Let’s have a look at why this is, and how we should be doing it in real cells

Most scientists think that t-tests, ANOVAs, linear regression etc rely on your data being normally distributed. Is that really true? And given that no data is perfectly normal, how normal does your data have to be? Can I see what effect non-normality will have on my hypothesis testing? I’m going to use some simply tricks that us to see how bad our distribution is.
END_OF_DOCUMENT_TOKEN_TO_BE_REPLACED

It seems like every paper I look at these days has Nonnegative Matrix Factorization (NMF) in its methods somewhere. From machine learning, to calcium imaging, the seemingly magic ability of NMF to pull apart signals gets a lot of use. In this post I want to explain NMF to people who have zero understanding of linear algebra, show a few applications, and maybe give you some inspiration of how to use NMF in your own work.
END_OF_DOCUMENT_TOKEN_TO_BE_REPLACED

Finding good information on how filters work, what the different types of filters mean, and how you should filter your data is hard. Lots of explanations only make sense if you have a year or two of electrical engineering education, and most of the rest are just a list of rules of thumb. I want to try to get you to a place where you can test your own filter settings, and show you the importance of the rules of thumb without going into the relatively complex math that is often used to explain filters. Warning: a lot of the code I’m going to use requires the Matlab Signal Processing Toolbox. If you don’t have it, you wont be able to execute the code yourself, but hopefully you’ll still be able to follow along with the logic.
END_OF_DOCUMENT_TOKEN_TO_BE_REPLACED

Even though we are now in the era of optogenetics, electrical stimulation of excitable tissues is still common place in the lab. However, despite how common they are, I see that a lot of people don’t fully understand why they using some fancy expensive box to deliver the stimulus, rather than just, say, using the DAC output of your digitizer. The actual physics of why passing current through your tissue excites neurons/muscles is a bit more complex than you might think, but that’s not what I’m going to talk about. I’m going to talk about what a stimulus isolator is, and why we use them. END_OF_DOCUMENT_TOKEN_TO_BE_REPLACED

Suite2p is a wonderful Matlab toolbox written by Marius Pachitariu for analyzing population calcium imaging data. It uses a number of computational tricks to automate and accelerate the process (so no more drawing regions of interest (ROIs) by hand!). However, I spend most of my time imaging dendrites and axons, and here suite2p has a problem. Suite2p uses a heuristic that is looking for approximately elliptical ROIs, and hence it tends to split axons/dendrites into a large number smaller ROIs. The problem was simple: how can we merge the ROIs belonging to single cells? Well I used the logic that ROIs that belong to the same neuron should have highly correlated calcium signals (yes, I can imagine a situations where this wont be the case in dendrites, but bAPs will still dominate the calcium trace 99.9% of the time). Hence I simply correlate each ROI with every other ROI. ROIs with a correlation coefficient above some user settable threshold are considered to be part of the same process.

The main script is available here, and it requires distinguishable_colors.m (which in turn requires the image processing toolbox I believe).

The code is relatively well documented/commented, and there is even a ‘Help!’ button. If anyone has any problems with it, please let me know.

In part 1 of this post, I discussed the very basics of neuronal modelling. We discussed the fundamental equations that explain how ion channels create current and how current changes the membrane potential. With that knowledge, we created a simple one-compartment model that had capacitance, and a leak ion channel. But we didn’t have any action potentials. In order to model action potentials, we need to insert some mechanism to generate them. There are several ways of doing this, but the most common is the Hodgkin and Huxley (HH) model. I’m going to dive straight in to understanding the HH model, and as usual, I’m going to start from the ground floor.

END_OF_DOCUMENT_TOKEN_TO_BE_REPLACED

I think a lot of people are confused about neuronal modelling. I think a lot of people think it is more complex than it is. I think too many people think you have to be a mathematical or computational wizard to understand it, and I think that leads to a lot of good modelling being discounted and a lot of bad modelling being let through peer-review. I’m here to tell you that biophysical models on neurons don’t have to be hard to implement, or understand. I’m going to start you off on the ground floor, in fact, below the ground floor, this is the basement level. All you need to know is a little coding (I’m going to do both Matlab and Python to start). But I should temper your expectations. When we are done, you’re not going to be ready to publish fully fledged multi-compartment models of neurons, but at least you will understand the fundamental principles of what is happening. And the most fundamental of all is this…

END_OF_DOCUMENT_TOKEN_TO_BE_REPLACED 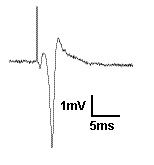 A CA1 population spike is the field potential recorded near the cell bodies of the CA1 pyramidal cells, when their afferents are stimulated strongly enough to cause the CA1 cells to spike. You see a brief upward deflection, which is an artefact from the electrical stimulation used to activate the afferents. Then you see a small downward deflection, which is due to the action potential in the afferent fibers. Then you see the population spike: the large, brief, negative potential caused by thousands of neurons spiking synchronously. It is negative because when the action potential is generated, Na+ moves into the cell, making the extracellular space negative. But here is a question: Why does the population spike appear to be resting on a positive going hump? Read on and find out, and learn more about field potentials in general.
END_OF_DOCUMENT_TOKEN_TO_BE_REPLACED